For many collectors getting their hands on the best of the best or the hardest to find item within their niche or category of what they collect is a must. In the Vintage Transistor Radio or Pocket Radio world the Vintage Toshiba 6TP-304 Six 6 Transistor Radio known as the “Coffin” radio is one of the most hunted and highest value radios there is (Not The Most Valuable or #1 on the list but it’s on the top of the list).

Other radios that have big price tags and resell value include the Sony TR63, Toshiba Lace Radios, Zenith Royal 500 “Owl”, ALLIGATOR MITCHELL OLD ANTIQUE REGENCY TR-1 TRANSISTOR RADIO, KR-6TS1 KOYO 6 Transistor radio – JAPAN, Toshiba 8 TP 90 Transistor Radio, all of the mentioned radios ca and do fetch $500 or more in certain markets like Ebay and online auctions. A global market is needed to fetch these prices! In a local market it will be hard to get this kind of money unless you hit the lottery and bump in to a diehard collector that needs one right away on impulse.

Now back to the the Toshiba 6TP-304 Six 6 – This radio is HOT! and if you are lucky enough to find one in good shae and working at a yard sale or other sale that is priced cheap, BUY IT! You can expect it to sell for $500 and up. Condition matters but if the radio is beat up and is only a few bucks buy it anyway! The parts are very valuable also. Ebay is the market to sell these! Even the empty boxes can bring $100 or so (Like the one I found) – See pics below. 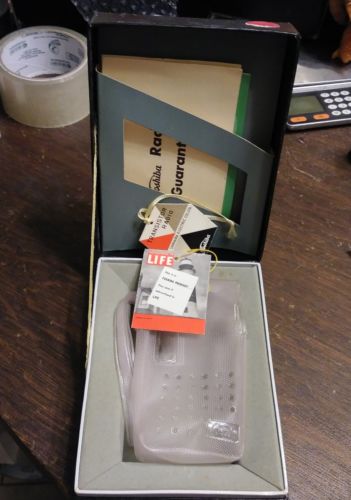 The Toshiba 6TP-304 was manufactured in Japan in 1959, making it a mid-century modern (MCM) treasure for those that are in to MCM goods . Featuring an amazing art deco funky design that made other radio companies fire their designers and run for the drawing room!  The team at Toshiba really surpassed all expectations when designing this radio. It is beautifully made and I believe it to be one of the best looking transistor radios ever made.

This Toshiba (6TP-304 Six 6) has been nicknamed ‘The Coffin’ because of it’s unique almost coffin like shape. Apart from the unique and macabre cabinet shape this 6TP-304 also features a vertical under-painted slide rule tuning dial. The style of lettering used on the tuning dial is very uncommon for this time period and is another reason why this radio was way ahead of its time and the competition.

The front of the cabinet is neatly divided into four visually pleasing sections partitioned by a gold band. There is a nice eye catching badge at the bottom right of the speaker grill.

In 1959 it had a sale price of $39.95 USD. Toshiba transistor radios were distributed in the USA by Transistor World Corp of New York. They were distributed in Canada by Regal International Corp of Montreal. In the USA Toshiba radios were sold by Jewelers who purchased them via Jewelers Circular Magazine.
Do you have a 6TP-304 Six 6? Comment and tell us where you found it and what you paid for it! Feel free to add a link to photos.